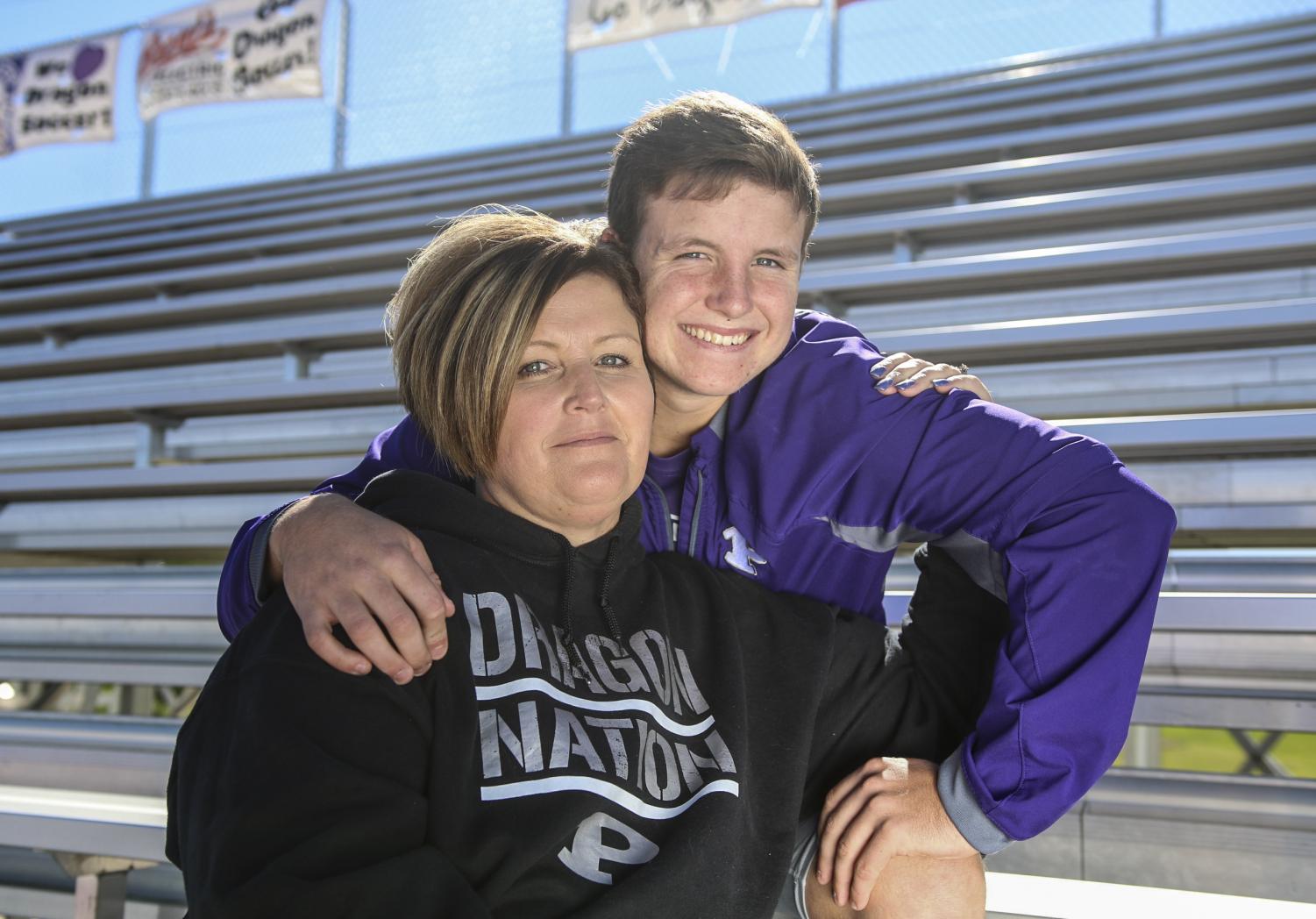 Sitting on the soccer bleachers, junior Caden Bressler embraces his mom, Trasie, who was diagnosed with breast cancer last spring. Caden plays varsity soccer and Trasie is a member of the soccer booster club. “Having my mom in the stands makes me play better,” Caden said. “I want to make her proud.” (Photo by: Aubrey Bolinger )

Sitting on the soccer bleachers, junior Caden Bressler embraces his mom, Trasie, who was diagnosed with breast cancer last spring. Caden plays varsity soccer and Trasie is a member of the soccer booster club. “Having my mom in the stands makes me play better,” Caden said. “I want to make her proud.”

Junior Caden Bressler spends most of his waking hours on the practice field.

Starting his second year after moving from Paola, he’s earned varsity positions on the football, soccer, baseball and basketball teams. His name is chanted in the student section on Friday night during football games.

He’s used to pressure on the field.

During the homecoming football game against Fort Scott, he kicked a 30-yard field goal with 1:19 left ticking on the scoreboard, giving the Dragons the lead late in the game and securing a 17-14 victory.

But at home, he deals with a different type of pressure.

It doesn’t have to do with the minutes left on the scoreboard, the number of goals he’s kicked or the upcoming games he has to play.

It has to do with his mom.

He’s watched her laying on the couch, hooked to drain tubes — battling Stage 2 breast cancer. And every day, he wondered if she was going to survive.

“When something happens to your family member, especially your mom, it just takes a toll on you,” Caden said. “Your whole body doesn’t function right, and that’s what mine did.”

Trasie Bressler is principal Phil Bressler’s wife and a mom to four kids. She has two sons: freshman Reece Bressler and Caden. She also has two daughters — Ellee, who’s currently in elementary school, and Cynthia, a Kansas State University graduate.

Caden, her oldest son, was preparing to leave for his regional baseball game last spring on the day Trasie got a call about her diagnosis.

“My body just drained,” Caden said. “Mom was not Mom at that moment. Knowing what cancer can do to people really took an effect on me that day — knowing that I could lose my mom, or that my mom’s going to beat cancer and get through it… just having the unknown.”

According to the American Institute for Cancer Research, breast cancer is the second most common type of cancer in the world. It formulates when breast cells begin to grow uncontrollably and create a tumor.

To get the cancer out of her body, Trasie had one option — a double mastectomy, a surgery in which doctors would surgically remove both breasts.

“It’s a journey you don’t want to take and you think you’ll never take,” Trasie said. “When you’re 43 years old, you think you’re healthy, life is good and everything’s the way it should be.”

Fifteen days after she got the call, Trasie had surgery at a hospital at Overland Park Regional Medical Center.

“Before my mom had to leave for surgery, I sat in my room for two hours,” Caden said. “I sat there thinking and I cried a little bit because I knew she was worried about it more than I was, which is something I never have to think about because I know my mom is always going to worry about me before herself.”

During the three-hour procedure, Caden went with his cousin to watch a movie as a distraction. He was back in time to hear the good news.

“‘I did it. I beat it,’” Caden recalls Trasie saying, before she went back to sleep.

The surgery may have removed her cancer, but the journey to healing had just begun.

It’s a journey you don’t want to take and you think you’ll never take.”

Trasie’s surgery came with a six-month recovery period, and that meant saying goodbye to her normal routine — attending her kids’ activities, cleaning the house and running her home decor sign business.

“All she could do was just sit in a chair and sleep,” Caden said. “When she got up, she would have these drain tubes that were draining out the bad fluids. I know she was in pain… That was something I never saw my mom go through [before]. It was hard on me and took a toll on me.”

This year, she made banners of all of the senior soccer players. She also makes and sells Power P signs through her own business, PaddyWhacks. She donates a percentage of the proceeds to the soccer team.

After her diagnosis, Trasie’s kids and husband stepped up to the plate and started doing the “little things” around the house — vacuuming, sweeping, cooking and running her business.

“There are times where she wanted to quit,” Phil said. “I talk to [students] all the time when they want to quit something, and [I say] there’s nobody that pulls themselves up by their bootstraps all the time. There’s times where we’ve had to hold our hand out and grab a hold of somebody else to pull on us. I think for her, that’s been one of the hardest things — to accept help from others because she is so strong.”

Four weeks after her surgery, Trasie got back up on her feet, and went back to her normal routine of helping with her kids’ activities, house duties and job. Staying busy was her coping method.

“Those kids of ours, they have a way of not letting us be down for too terribly long,” Trasie said. “Sometimes I complain about how busy we are, but I’ve been so thankful for the fact that we are a busy family because it doesn’t leave us too long to dwell on the bad.”

“My heart was with my mom, but my body was somewhere else,” Caden said. “I played baseball all summer long, every single weekend. Having those things around kept me from having to worry about my mom constantly. I would call her and check on her of course, but that’s how I got through it.”

When something happens to your family member, especially your mom, it just takes a toll on you. Your whole body doesn’t function right, and that’s what mine did. ”

The Bresslers were overwhelmed with community support, never knowing when someone would knock on the door to offer food or moral support.

After Friday night football games, junior class students and parents pick up trash at the stands at Hutchison Field as a prom fundraiser.

Trasie participates in this Pittsburg tradition.

One night after her diagnosis, someone anonymously picked up all of her shifts for trash pickup.

“I believe [God] moved us to the perfect place so we could be taken care of,” Trasie said. “People have come out of the woodworks to help us, and it’s crazy.”

The soccer booster club organized a pink-out theme for the soccer game on Sept. 11. The club members bought pink shoelaces for the players to wear during the game, and some of the players wore pink wrist tape.

“We kind of wanted to do something quiet, but honoring her in a way that we can,” said Ashlei Bockover, president of the soccer booster club. “We were doing it to show our support for her.”

The booster club bought shoelaces for the varsity players, but Trasie wanted the junior varsity players to be included. She bought extra laces with money from her own pocket.

“Even in the situation where the team is trying to support her, she’s still trying to play the role of soccer mom,” head soccer coach Kyle Bockover said. “It was nice to give our teammate and his family that support too.”

The team dedicated and played the game for her, walking off the field with a 3-0 victory against Chanute. Then, each player hugged Trasie.

“I just remember her tearing up and me tearing up,” Caden said. “It just meant a lot to me because I know we were playing that game for my mom. Just to come out with a victory was something that made me really happy and made my mom really happy.”

On Sept. 20, Trasie found out she had another battle to fight.

She was diagnosed with endometrial cancer. She had another surgery, and it was scheduled on Sept. 29 — the same day as Caden’s football game in Ulysses.

On the six-hour drive to the game, Phil kept Caden informed about his mom via text.

Her surgery ultimately removed the cancer a second time.

“It was a good feeling because I knew my mom was good,” Caden said. “I was upset that she wasn’t there to watch me and I knew she was too. That game just meant more for me: to play for my mom.”

Even after the end of her battle, Caden strives to make his mom proud with every game he plays.

“Playing with emotions makes you a better athlete,” Caden said. “I think that’s what’s going to make me a stronger person in the long run, because I’ve dealt with [hardships].”