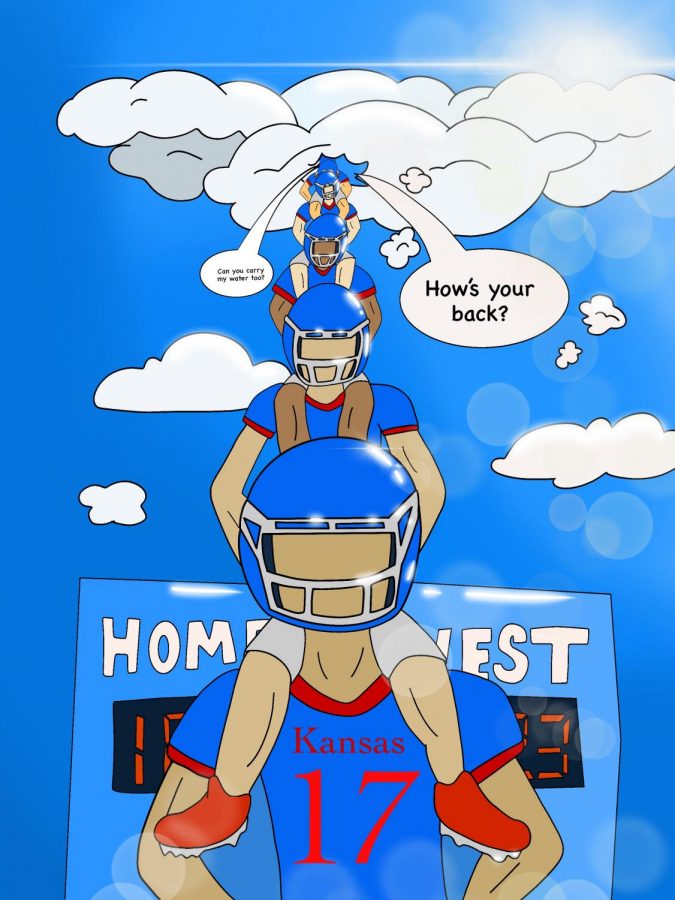 Here we are again.

As of week six, The University of Kansas’s football team sits at a disappointing record of one win and five losses, with their only win coming from narrowly beating South Dakota, an FCS team, 17-14.

Despite being outscored 219 points to 86 points, there has been one bright spot on this disappointing team: quarterback Jason Bean.

Bean transferred from the University of North Texas to Kansas for the 2021-2022 season and he has looked great (for KU standards). He has thrown for five touchdowns, three interceptions and nearly 900 passing yards.

Although that isn’t close to being a Heisman-winning performance, it is better than KU fans are used to.

Where Bean has really shown glimpses of greatness is with his legs. Bean leads his team in rushing yards with 4.9 yards per carry and has two rushing touchdowns.

Even when the play is not a designed run for Bean, he is able to escape a collapsed pocket very well and turn it into a few yard gain.

After years of unimpressive quarterback play, it is refreshing to finally have a player who excites the fans, a player like Bean.

In their week four loss to Duke, Bean threw for over 300 yards, 2 TDs, and 2 Ints. He also ran the ball 15 times for 54 yards. Despite this performance, Kansas’s defense could not hold their end and they lost 33-52. Many times throughout this game, Bean showed signs of greatness.

Whenever I say Bean shows signs of elite playmaking, I don’t mean he is perfect. In fact, he is far from it. Bean played through the entire first three games without throwing an interception, which is remarkable for a Kansas quarterback.

However, instead of making risky throws that would lead to a turnover, he will often throw the ball away. While this decreases the amount of turnovers he is responsible for, it sometimes leaves the team in a bad situation because they desperately needed a first down.

It may be an overreaction to say this, but I believe Bean is the best quarterback Kansas has had since their legendary 2007 season with quarterback Todd Reesing. Although I don’t think Bean is on Reesing’s level just yet (33 TDs, 7 Ints in 2007), I think he shows signs of greatness every time he steps on the field.