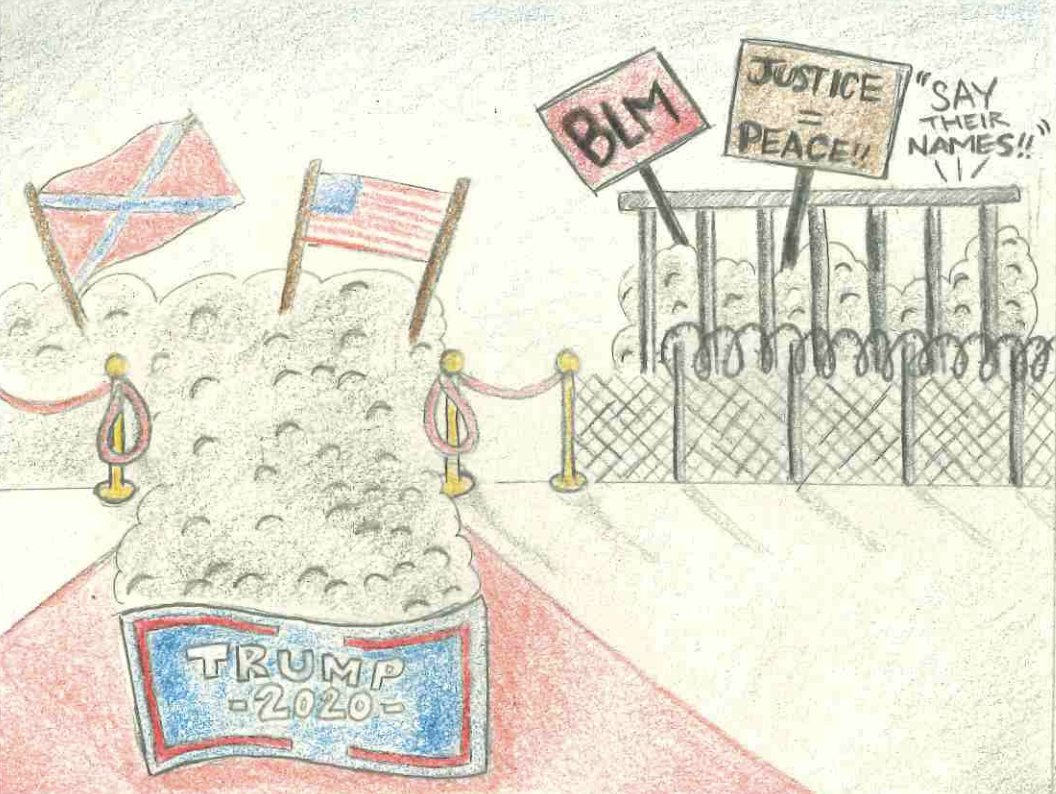 This illustration showcases how police reacted to the Black Lives Matter protests compared to the Capitol Break in protests. (Photo by: Joy Lee)

This illustration showcases how police reacted to the Black Lives Matter protests compared to the Capitol Break in protests.

Following the incident Wednesday, January 6, in which white nationalist demonstrators overwhelmed police officers and breached the United States Capitol building, and the nature of the response by authorities has raised questions.

The first source of confusion stemmed from the lack of National Guard protection after the online planning of ‘Stop the Steal’ protests became publicized. Officials claimed that National Guard support was readily available, but never requested, and after resigning, then Chief of Capitol Police Steven Sund claimed that he in fact did submit a request which was refused. Guardsmen were not deployed until late in the evening. Conversely, last summer as Black Lives Matter activists amassed in Washington, D.C. to protest police brutality, 4,000 National Guard troops were preemptively activated in the Capitol. Due to a miscommunication or otherwise, a non-urgent response to imminent and expected danger is suspicious.

Criticisms have been amplified as well by the perception that the police reaction to Black Lives Matter protests last summer was draconian and that the inability to defend the Capitol building while the Senate was in session displays inconsistencies in the treatment of protests depending on the convictions, or perhaps ethnic makeup, of the participants.

This duality in outlook is illustrated by the fact that whilst a mob of right wing extremists infiltrated the Capitol, destroyed, pilfered and stole personal property of congresspeople, a police officer inside the building was quoted as saying that “we’ve just got to let them do their thing now.”

Although anecdotal, there seems to be a stark discrepancy in individual reaction by police now compared to protests over the summer. Clashes that many believe were initiated by the police left some protesters seriously injured, and some dead, whereas many right wing insurrectionists found entering the Capitol building surprisingly unimpeded, and the few alterations that did occur left two police dead.

Drastic rhetorical and material differences have also been observed in the conduct of former President Trump. During previous Black Lives Matter protests, he referred to participants as “extremists” and “thugs” while people were abducted by federal agents in unmarked vehicles, contrasting with the President repeating unverified claims of election fraud and additionally remarking that “we love you” directed towards violent supporters on Capitol Hill.

Data compiled by independent researchers have concluded that since April, despite the majority of protests organized by both the left and the right remaining peaceful, police are over three times as likely to use force against left-wing protesters.

52 arrests were made in Washington, D.C. on January 6, whereas on June 1, 2020 alone 289 people were arrested for ‘unrest related’ reasons in the midst of protests against police brutality, and between May 30 and June 2, 427 arrests were made. Nationwide, approximately 14,000 arrests were made during anti-racism protests over the summer.