A closer look at the latest trend 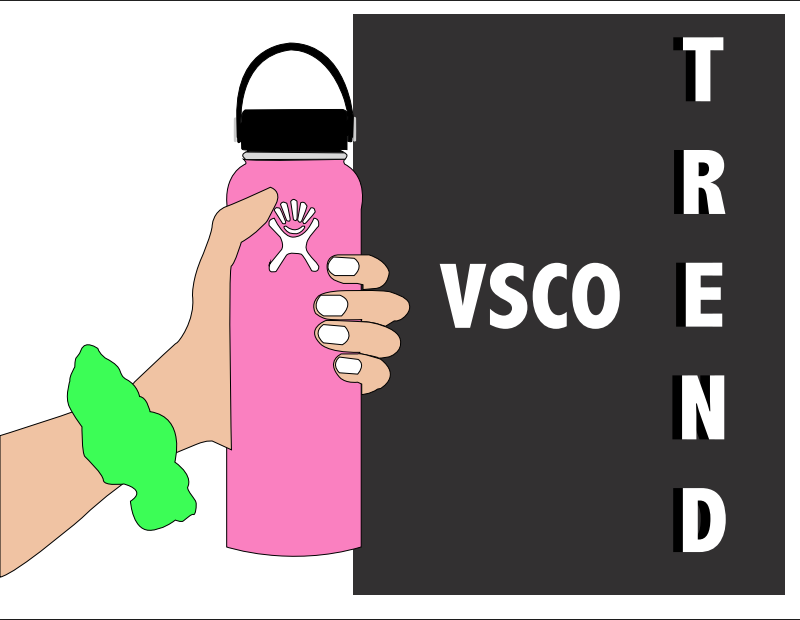 Walking down the hallways, it’s noticeable that several girls are wearing similar outfits — an oversized t-shirt over athletic shorts, a scrunchie, a puka shell necklace with a Hydro Flask water bottle in hand. These girls have been labeled as “VSCO girls”.

According to an Urban Dictionary definition, VSCO girls are “the Tumblr girls of 2019, you’ll probably catch them wearing a scrunchie, tube top, puka shell necklace, white vans or Birkenstocks and don’t forget the Hydro Flask to finish off the look.”

The term originated from social media but more specifically, this label came from the photo editing app VSCO. This app features filters and other editing tools and it also lets you upload your photos on to the VSCO platform.

“I think of VSCO the app,” freshman Alexis Shidler said. “It started out as a photo editing app and then it kind of just changed into a personality.  Everybody [also] thinks of Hydro Flasks and scrunchies.”

Trends have come a long way from people doing popular dance moves like the Moonwalk to people saying “Sksksk and I oop!” when they drop their Hydro Flask.

“When I was in high school girls wore only dresses,” secretary Karen Odgers said. “There were no pants and no jeans.  Even wearing a t-shirt to school was not allowed. Then before [holidays], we had what was called dress-up days and that was really getting dressed up.  High heels for the girls and suits and ties for the guys. Everybody liked to do that, but obviously that’s a long time ago.”

In the 80s, trends became bolder and expressive.  Parachute pants were popular and a common color palette was neon.

“[Some trends back then were] big bangs and feathered hair,” science teacher Karen Curran said. “Leg warmers, pinning your jeans at the bottom and all that stuff has already come back around.  Oversized sweaters, oversized shirts tied at the corner. Nike Cortez was big. Jams were Hawaiian print shorts and they were big, oh and Tube socks, everybody wore high socks.”

The VSCO trend started on Social media and with how much this generation spends time on social media no wonder this trend became so popular.

“You see a lot of celebrities on Instagram who obviously looks like [VSCO girls] like Emma Chamberlin and other celebrities and of course, the app has a ton of stuff that influences people [too],” sophomore Rachael White said. “People on social media want to be like people that they see on the internet.  So if someone’s like ‘Oh they’re doing this that sounds cool I want to do it too.’”

Now that trends are easily noticed and can be started through social media, it can be hard to imagine how people kept up to date on the newest styles before social media.

“[We got our trends from]  MTV, T.V. shows and magazines,” Curran said. “Teen Beat was still a thing then, 17 Magazine, and Cosmo.  But probably mostly TV and movies were our media outlet. “

It is hard to say when the VSCO trend will end, but after it does there will probably be another trend waiting in the wings to swoop in and take its spot.

“Trends don’t last as long as they used to,” Curran said. “That’s somebody’s claim to fame.  If they can start some kind of off the wall thing, and it catches on with a few people then it becomes this huge deal across the globe.  But then in the blink of an eye, it’s gone because there’s some other big thing coming right behind it.”