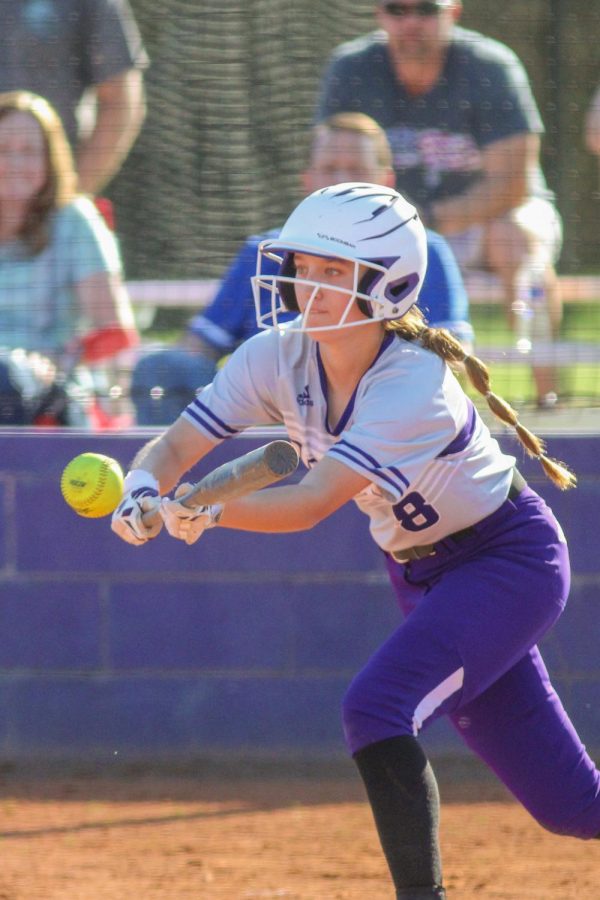 Junior Molly Garzone bunts the ball during a game against Riverton.

The 2021 girls softball team is absent of seniors, but not absent of leadership. With a young team, the junior class is forced to step up and fill the seniors’ role.

Moving forward into next year, not having any seniors will end up benefiting the entirety of the softball team.

“Those juniors are going to be seniors next year so it’s gonna be great to have them as senior leaders next year,” Head coach, Karen Curran said. “It’s just great that they’re having an opportunity to learn how to be a team leader.”

Stepping up as a leader hasn’t come down to one individual person, but the team as a whole.

“We’ve all filled the role by stepping up and helping people during practice. [Whether it be] critiquing people [or] making sure everyone knows what they’re doing,” junior Cheyanne Hunt said. “We all feel like we’ve been really good leaders.”

The focus of this year has shifted in comparison to last year when it comes to growing as a team.

“This year, we’ve focused on being positive,” Haake said. “Hopefully, [the freshman] take what we’ve been doing and keep the positivity.”

According to Haake, not having the best encounter with seniors when she was a freshman has helped her avoid making the same mistakes toward the current freshmen.

“I don’t think I was very welcomed,” Haake said “So I wanted to make sure the freshmen didn’t feel [the same way I did],”

Looking into at least the next four years, the team has nothing to worry about when it comes to leadership.

Curran contributed towards the preparation, in order for the team to be successful.

“I wonder who else was bleeding at 6:30 a.m on the gym floor in February, getting ready for their season?” Curran said. “We were, and it’s paying off now.”

According to Curran, lacking seniors has only brought positive impacts.

“We’ve had nothing but good things come about without having any seniors,” Curran said. “I’m happy to see them experience some success, build their confidence, and be recognized for their hard work. I just hope we have more good things to report on later on.”