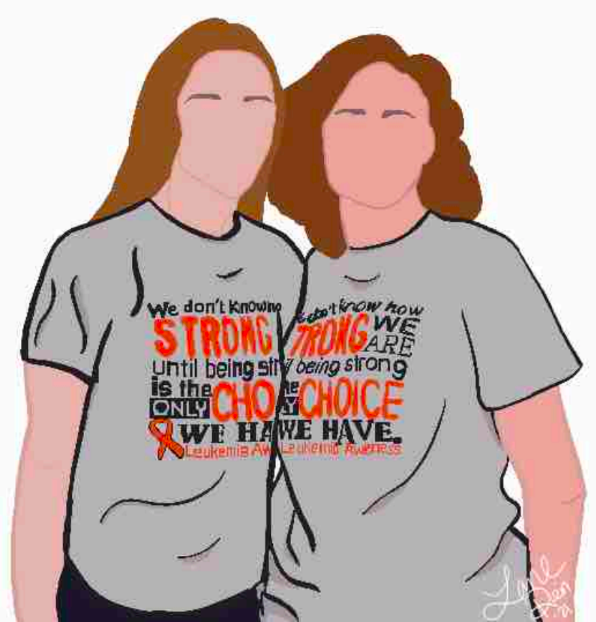 Junior Beth Blessent beside her mom, wearing matching t-shirts they had made to support Terri through her cancer journey.

Sitting on her bed, junior Beth Blessent listens to a podcast for her world history class. She’s taking notes, when she hears her mom, Terri Blessent come in the front door. She calls to her from the bedroom, but gets no response.

Not thinking much of it, Beth pushes play on her podcast and continues with her notes.

After Terri returned home, she sat on the couch. On a usual day, she would go in and talk with Beth. Today, she was quiet.

“I figured maybe she wasn’t having a good day,” Beth said. “I kinda brushed it off because when your mom comes home and seems like she’s in a bad mood, usually you think she just had a bad day.”

When Terri walked in the room with tears in her eyes, Beth knew something was wrong.

“She got teary eyed and I thought I had done something wrong,” Beth said. “She assured me that she was fine and told me that she got some really big news.”

The day before, Terri had a doctor’s appointment. Her checkup consisted of routine tests with blood work, and a mammogram, which was scheduled for the following day. After getting her blood drawn, she went home.

After she completed her mammogram, she stopped by the grocery store.

At home, she was putting away her groceries when she answered a call from her doctor.

“I thought it was strange that they wanted me to come back to review my blood work because I had never done that before,” Terri said. “But she asked me to come in right then so I finished putting up my groceries and left.”

“When Dr. Cranston came in with tears in her eyes, all I could think was ‘what the hell is going on,’” Terri said. “That’s when I realized that this must be serious.”

Her white blood cell count was 139,000, which is a key indicator of leukemia. Her previous lab results from the year before had been just above the high range, which cuts off at 10,000.

“I started tearing up and she asked if she could give me a hug,” Terri said. “I just remember knowing I was going to bawl my eyes out right there.”

“By this time I’m a blubbering mess and sitting there by myself thinking “Holy f— what am I going to do?’” Terri said. “I knew what leukemia was, but I didn’t really know what leukemia was. I had no clue what I wanted to do.”

About 15% of all leukemia cases are CML and roughly 1 out of 256 people will get it in their lifetime. This type of cancer affects mainly adults and is rarely seen in children.

Although it wasn’t an aggressive type of cancer, her numbers were skyrocketing quickly and they had to get her on medication as soon as possible.

“The whole time she was explaining this to me I just sat there thinking, ‘oh my god.’ I didn’t know what to think,” Beth said. “When someone tells you something like that what are you even supposed to say? I couldn’t say sorry, and I couldn’t not say anything, but I just couldn’t find any words.”

“They told me that if I didn’t get on medication, it was going to become acute and that would mean I would have to go to the hospital and I’d have to start a whole different realm of treatment,” Terri said. “Thank god though I didn’t have to do that.”

Soon after Terri started treatment, she began noticing the effects of the medication, and so did her family.

“Sometimes she would be too tired to do anything so we would have to stay home. We would have to get her pills for her sometimes because she was too weak to get up. She would take one, two and sometimes even three naps a day,” Beth said. “She wasn’t eating either.”

Among the side effects Terri experienced, the most impactful included nausea, weight loss and loss of appetite.

“I didn’t eat anything for a long time,” Terri said. “I would go hours, sometimes even a whole day just eating a single cheese stick because otherwise I felt horrible and nauseous. I just quit eating.”

According to Terri, although she is diagnosed with leukemia, she doesn’t fit the typical cancer patient stereotype.

“It’s weird to me to tell people I have cancer because I don’t feel sick now. I feel like me,” Terri said. “A few pounds lighter and a few issues I have to deal with, but on the outside I don’t look the part. I don’t look like the stereotypical person who has cancer.”

It’s now been a year since Terri began her treatment. When she went in for a checkup in March, the cancer was still .9% traceable. Based on this, her care team anticipates her to be in remission by June 28, which is her next appointment with Dr. Mathew.

“This is just something I have and will always have to deal with,” Terri said. “In the beginning, it was different, but now it’s just a part of my life.”

Once in remission, she will be monitored for a couple months longer. If her white blood cell count stays level, she will go back every six months to a year for the rest of her life. As long as her medication doesn’t cause her any further complications, they will leave her on it.