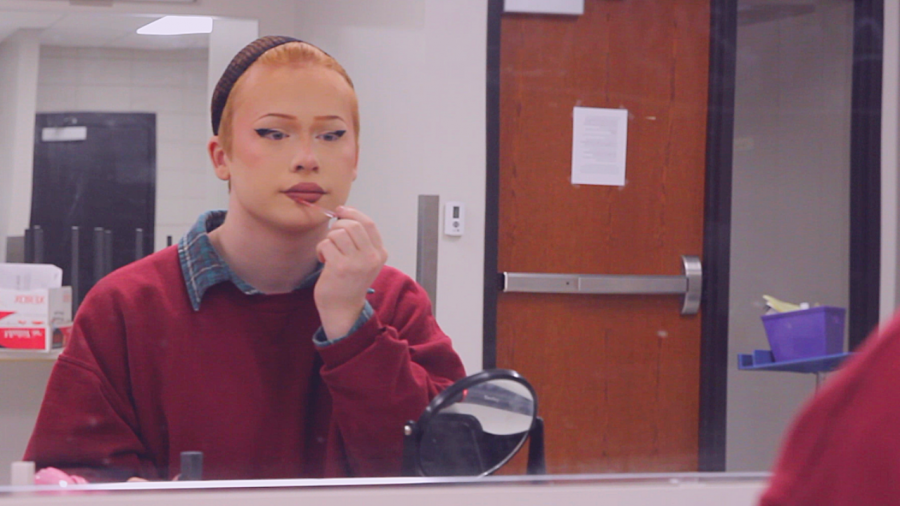 Junior Drake Plain begins applying lipstick as part of his makeup look for the day.

As junior Drake Plain gets ready for school, he gets out of bed, brushes his teeth and begins applying his makeup look for the day.

For years, Plain hid his passion for makeup behind closed doors but once freshmen year rolled around, he decided he didn’t want to be hidden anymore.

Plain discovered his love for makeup early on in life. He spent the majority of his youth watching makeup tutorials along with having his older sister and friends do his makeup for him. Because of this, he began his journey in learning how to do it himself.

“I started experimenting with makeup myself my freshman year. I always watched people do it growing up and over time, I began to find a passion for it,” Plain said. “When I put makeup on my own for the first time, it was honestly really life-changing for me. I feel like I can be myself and that I can do anything.”

Aside from makeup, he also wears skirts and dresses as a way for him to express himself.

“I started wearing skirts and dresses this year. I saw it as another form of self-expression and a way for me to show the world that gender shouldn’t be associated with clothing,” Plain said. “It’s time for a change and I want to be a part of that.”

Roughly a month ago, Plain decided to wear a skirt for the first time at school where he faced both support and disapproval from students.

“When I first walked into the school with my makeup and skirt on, I was honestly really scared. I bought a pair of jeans with me to school in case I were to get dress coded, harassed or threatened,” Plain said. “But thankfully I had my friends there to remind me to not be scared and that I looked awesome. My teachers and administrators didn’t say anything about it and because of my support system I felt way more comfortable wearing it.”

According to Plain, junior Bea Aragon has been one of his main supporters throughout his time in practicing with makeup.

“When Drake started wearing makeup, skirts and dresses, I wanted him to feel comfortable enough around me and others to express himself. I want to help boost his confidence in any way I can,” Aragon said. “Ever since he started his journey, he seems so content with himself and it makes me gleeful to see that he feels good in his own skin. I want Drake to be as happy as can be and feeling untroubled knowing someone always has his back.”

Prior to Plain expressing himself through makeup and dresses, he struggled with his sexual orientation. First coming out as bisexual when he was 12, his coming out experience wasn’t what he imagined it would be.

“During middle school, I came out to a close friend of mine as bisexual. That person then told more people, who told more people and more people until I eventually became the talk of the school,” Plain said. “My mental health went down really fast when I was outed. I felt as though I didn’t have anyone on my side, but I later realized that I had a lot more support than I thought at the time.”

Despite coming out as bisexual, Plain knew early on in life that he was gay.

“I knew I had feelings for boys around the age of six or seven, but since I was raised really religiously I believed that being gay was a sin and I would tell myself that what I was feeling was wrong,” Plain said. “When I came out as bisexual, I did it to fit in but because of my experience with coming out, I never came out as gay. I just let it happen and wanted it to be treated as something that was normal.”

According to Plain, after he started wearing makeup as a part of his everyday routine, his mental health began to improve.

“When I started wearing makeup, I was at a really difficult period in my life. I had been bullied really bad since middle school and while wearing makeup didn’t make it stop, it boosted my confidence to a whole other level,” Plain said. “Other people’s opinions began to not matter to me as much and wearing makeup made me feel empowered and like I was unstoppable.”

Throughout Plain’s journey, his friend junior Collin Spencer has seen his growth. According to Spencer, Plain has inspired her to

“Drake has grown so much, I remember what he was like before he started wearing makeup, skirts and dresses and how I could tell he never felt like himself. I think he has definitely become a lot more confident and happier now that he’s expressing himself,” Spencer said. “Seeing how much more comfortable he is with himself now, Drake is one of the reasons I started expressing myself too.”

Seeing that wearing makeup and feminine clothing doesn’t make him different, Plain uses these things to express himself and encourage others to do the same.

“I’m one of the only boys at PHS that wears makeup, skirts and dresses. I never really thought about it as something that made me different, but rather something that was a different way for me to express myself,” Plain said. “Being able to inspire and be a form of representation for boys and girls to be themselves is something I’m glad to be a part of.”