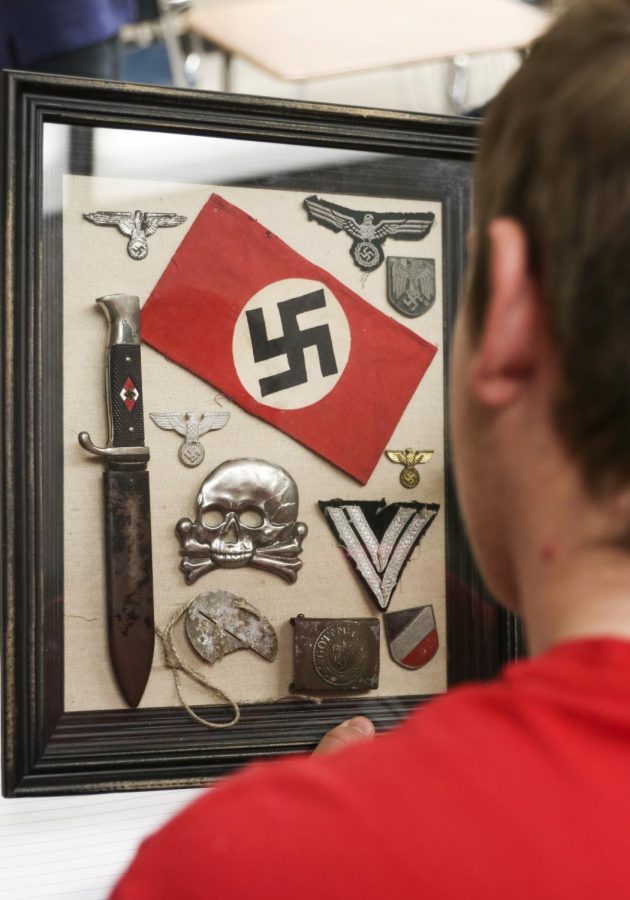 Junior Quentin Cole examines several artifacts brought in by Patrick Moss for his 7th hour American History class. Moss brought in primary sources to allow students a deeper immersion into their World War II lesson. "Getting to see those artifacts is really cool," Cole said. "He makes it really entertaining."

On Feb. 6, students in Patrick Moss’s 7th hour American History class experienced their lesson in a unique way. Students were able to get up close and personal with some artifacts from the time period they were studying.

“We’re studying World War II,” Patrick Moss. “We’re ending the war with the Nazis in Germany, and we’re shifting towards the Pacific War with Germany as well. I brought in some [artifacts] today and I’ll bring in some more tomorrow.”

Some of the items that were brought in were primary sources such as Nazi helmets, a Hitler Youth knife, some German stainless steel dog tags, Japanese flags, a samurai sword and pieces of Kamikaze plane wreck.

“Every once in a while I try to bring in as many artifacts as I can, especially historical [ones],” Moss said.

This particular group of artifacts hit close to home for junior Quentin Cole, a student in Moss’s 7th hour class. He has a history of relatives that fought in World War II and appreciated the familiarity of Moss’s lesson.

“Getting to see those artifacts is really cool because of my family history,” Cole said. “We have some artifacts that I’ve seen from my grandma’s dad’s side [of the family]. It just went hand in hand. It was just cool to see someone else with similar [artifacts].”

This isn’t the first time Moss has brought in relics from the past for his students. This immersive approach to American history allows for students to delve deeper into the curriculum than an everyday lesson.

“Every unit I try to have something that pertains to [what we’re learning],” Moss said.

Bringing in an artifact for every unit has an impact on the way his class is perceived by students.

It’s the duty of a teacher to help students understand the curriculum they are provided to teach, but to Moss, being a teacher means something else as well.

“I just [want students] to be inspired to want to know more,” Moss said. “Really the only good thing teachers do is build curiosity. That’s it. If a kid is curious, then they will go and find the answers themselves.”

These artifacts are not easy to obtain due to their unique relation to events of the past, but Moss has made sure to have some on hand. This specific set was from his personal collection.

“If some of the kids can’t get to the museum,” Moss said. “I can bring the museum to them.”