A class for every student 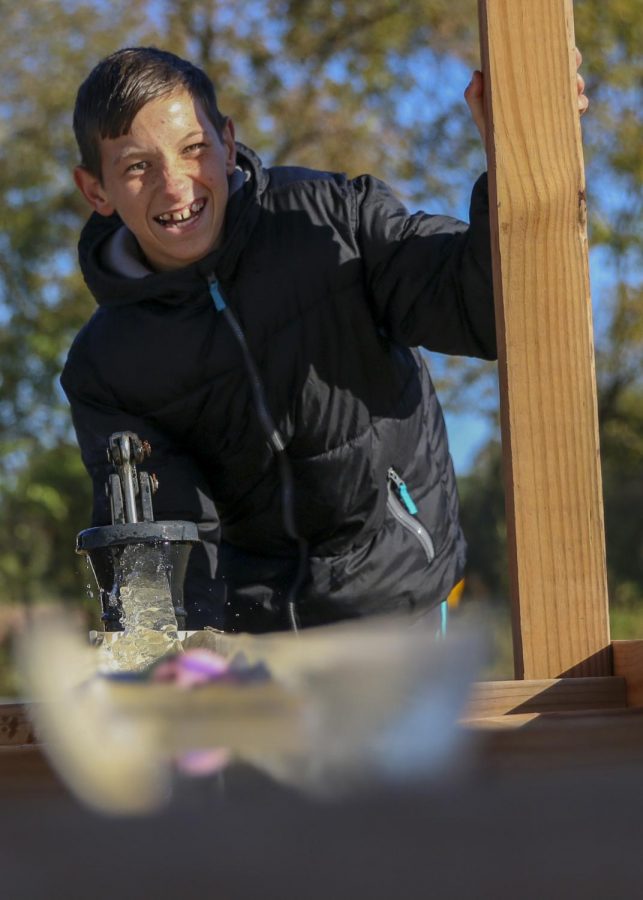 Before class starts, freshman Logan Johnson and senior Jorden Johnson start off their day by playing football together with a group of friends. Running to both sides of the gym, Logan and Jorden laugh as they try to see who can catch the ball first.

“It shocks me how the other boys involve him because he can be hard to understand sometimes,” Jorden said. “But they treat him the same and they just include him in everything.”

Logan is a student in Amber Kloster’s special education class, who also is enrolled in elective classes such as lifetime fitness, food basics and adaptive art. Logan’s older, brother Jorden, says that Logan is always trying to make everyone around him smile.

“He’s really sweet, he tries to do goofy things to make people laugh,” Jorden said. “I include him in everything I do, that’s why he’s so ornery, he’s always around me.”

“I recently got a student who is from Uniontown,”  Kloster said. “So I have a kid that comes 55 minutes every morning because I’m the closest low-incidence program.”

A low-incidence program is for students with a documented disability, whether physical or mental, that rarely occurs. Kloster currently has 10 students with various disabilities.

Jill Kangas teaches Life and Career Skills, where she prepares students for the workforce. Both programs participate in activities such as the Special Olympics.

Special Olympics is one way where students from the general education population work with Kloster and Kangas’s students.

“There’s a lot that goes into our programs and our students are very capable of learning, we find those needs and try to meet them so that they can be more independent,” Kloster said. “My kids are always going out into the community, so there’s a ton that goes into our day.”

According to Jorden, PHS has become a more inclusive place for students similar to his brother.

“It’s a lot more common for kids to meet people with disabilities and people now are just accepting,” Jorden said. “I just treat him as I would do with one of my friends because he doesn’t seem different to me.”

Kloster says that over the five years she’s taught, PHS has improved.

“I think that from my first year to now, it’s more inclusive,” Kloster said. “I put a lot of my students in elective classes and those elective teachers are awesome.”

Some of these elective classes include physical education classes with Bridgett Lancaster and food basics with family consumer science teacher Krystal Henderson. Art teacher Monica Collins has created lesson plans catered to the individual needs of each student in her adaptive art class.

“The students have such a great sense of humor, we have such a good time in here,” Collins said. “Whenever they come in, there are no mistakes, it’s their product and it’s perfect.”

According to Logan, adaptive art is one of his favorite classes.

“I like that class, we make projects, we’re making a dragonfly today,” Logan said. “We get to make a lot of stuff.”

According to Kloster, exposure is important.

“There are some that aren’t as inclusive as others, but they just haven’t been as exposed but I think they are all willing to be,” Kloster said. “But all four of our admin here are so positive and they want to include my students in everything and that makes a big difference.”

While Kloster says she feels included by staff and students, she hopes for more improvement for the future.

“We really feel included, even though my classroom doesn’t seem included, we are,” Kloster said. “With my next three years here, we’re going to get more and more included, every year I feel like it’s been better.”