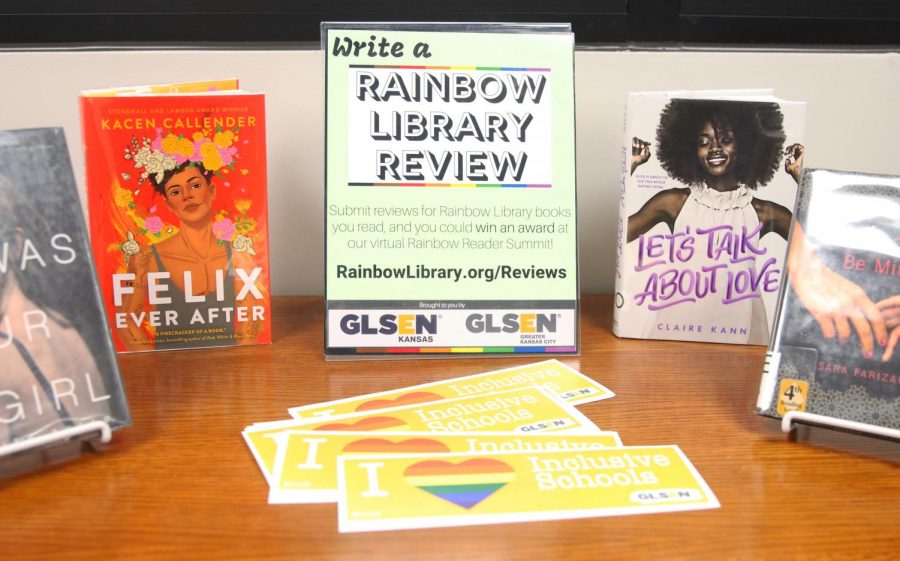 A showcase of the books featured in the Rainbow Library.

Several months prior to receiving the grant, the Gay, Lesbian and Straight Education Network (GLSEN) contacted school librarians across Kansas. Because of this, Warren applied for the grant in order to provide more LGBTQ+ books.

“When I received an email from GLSEN about the Rainbow Library grant, I knew I had to apply for it,” Warren said. “It’s important for me to have diversity and representation for my students on the shelves.”

For freshman Ro Mize, having the Rainbow Library makes them feel more accepted and represented within PHS.

“I think that by having this type of literature available to all students is important and allows members of the LGBT community to feel more normalized,” Mize said. “I like being able to see myself in a character in a book. A lot of the time during school, I feel a little bit isolated and there’s not a lot of things that I can relate to, but I feel like I can when reading these types of books.”

As an LGBTQ+ ally, junior Corin Cooper believes that having diverse literature is beneficial for  schools and the queer community as well.

“I believe that having LGBTQ+ books is important, not only for students but also for those that want to be more informed,” Cooper said. “More people at PHS might become more comfortable with their sexuality and gender identity and more accepted by having these types of books. Every student deserves to feel normal and included in all aspects of society.”

Warren received nine books from the Rainbow Library Community Reads Project on Feb. 24. However, as a result of being given books she already had on the shelves, Warren decided to donate duplicate books.

“I was excited to receive the books, but I already had all the books they were sending me,” Warren said. “I knew I wanted to supply the books to inclusive and LGBTQ+ advocating organizations so I decided to provide some books to Book Club and Equality Club as well. I believe that this was the right choice and that these organizations will benefit from having these books.”

“When I was shown the donations from Mrs. Warren, my immediate reaction was pride. I am lucky to work with staff that genuinely cares about representation for all and demonstrates that care,” Neil said. “To ensure that all groups of students in our school can access literature that represents their experiences is invaluable. Not only that, but students can gain insights into the experiences of others through literature. Mrs. Warren’s donation shows her incredible mindfulness and I applaud her promotion of equality and representation in our library.”