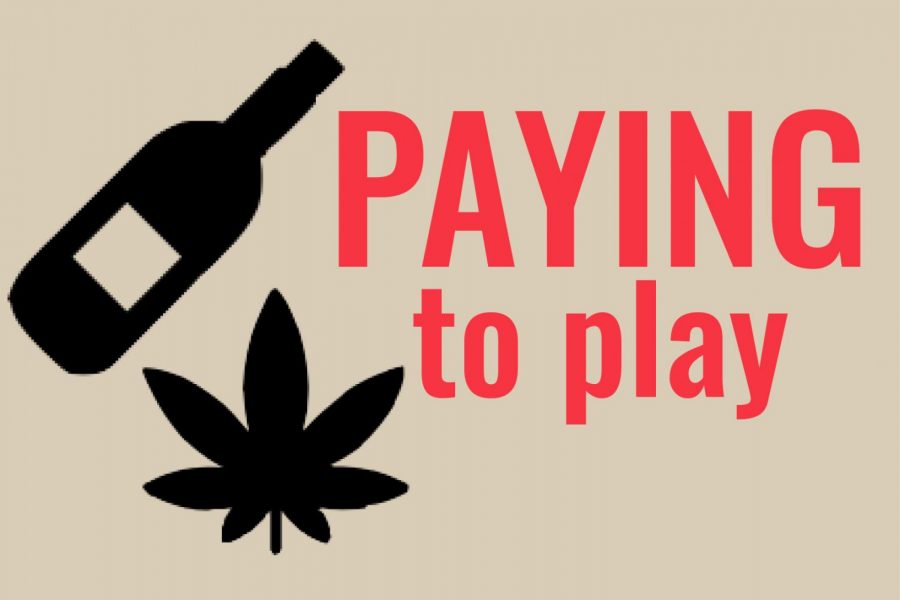 A study from the National Institute on Drug Abuse in 2013 revealed that somewhere around 30 percent of 10th graders and 40 percent of 12th graders have used drugs in the last year.

Some teens may use their $20 to buy dinner or go to the movies, but Tom, a junior boy who drinks alcohol and smokes marijuana recreationally, decides to spend his money differently.

Tom has requested to remain anonymous due to the sensitivity of the subject.

I have a job so I just use my own money. Usually a $20 bottle,” Tom said. “I like the feeling, everything’s funnier when you’re drunk. I also sometimes end up having deep conversations with friends while I’m drunk.”

A study from the National Institute on Drug Abuse in 2013 revealed that somewhere around 30 percent of 10th graders and 40 percent of 12th graders have used drugs in the last year.

McNally is responsible for assessing his patients’ needs, creating a therapy plan and referring them to a professi

onal who can prescribe medication if needed.

“I think that for a lot of people it is trying to make some type of emotional pain go away. Some kids get involved in it just because it’s often widely accepted by the culture,” McNally said.

According to McNally, most of the patients he works with used substances in high school.

“Out of the patients that I work with probably somewhere in the 50 percent to 70 percent range were using drugs and alcohol by the time they were 16 years old,” McNally said.

Even though there is no good time to start using, McNally believes that starting as a teen is especially harmful to the user.

“I see a lot of younger kids that are exposed to drugs at a very young age. That’s an especially dangerous time to start using because the brain is not fully developed and is a lot more susceptible to either drug or alcohol dependence,” McNally said.

According to McNally, most of his patients use substances to self medicate and deal with an emotional struggle.

“I think that there’s a lot of people that turn to it because it’s available, and they try it and like the way that it makes them feel,” McNally said. “It allows them to self medicate for some type of internal emotional pain that they’re struggling with.”

Multiple factors may influence an individual’s addiction, and McNally believes that it may involve heredity.

“I would say that usually there is a genetic component, there’s an environmental component and there’s a certain type of person that is definitely more likely to develop a substance use or an alcohol use disorder,” McNally said.

McNally believes that addiction can come down to human nature.

“As humans, we’re all driven to things that bring us pleasure, and we run from things that are painful. With drugs, youget a very euphoric pleasurable feeling, and it also makes your pain go away,” McNally said. “The problem is that it’s very short lived and temporary so the body ends up just wanting more and more to maintain it. So at a certain point, somebody may begin to use because they have to and not because they enjoy it.”

In McNally’s experience, often times there is a link between violence in homes and early drug usage.

“A lot of times, when you have a lot of drugs in the homes, you do have some violence, and then you have your kids that are exposed to traumatic things that begin using drugs and alcohol just to cope with some of the traumas that they’ve been exposed to as kids,” McNally said.

Drug and alcohol dependence not only affects the user, but also affects the relationships of their friends and families.

“When somebody is solely focused on feeding or, you know, being being run by their addiction, then that becomes their top priority and their actions are totally driven by that urge and then everything else becomes second,” McNally said.

Tom is no stranger to the effects that substance abuse can have on a family, yet he still decides to drink.

“My uncle passed away because he was an alcoholic. He got jaundice and his liver failed, all he ever did was drink. He was in his early forties, so he was young. I keep doing it because It’s just something fun to do. I don’t do it all the time so I feel like it’s okay,” Tom said.

Often times, the absence or decrease in effort due to a drug or alcohol addiction distances the user and his family.

“You just get a different person. You’re dealing with a different individual who is not totally committing their time and energy into those relationships,” McNally said. “And so, the time from acquiring and using is taken away from the focus of solidifying that relationship, which creates a fracture in the relationship.”