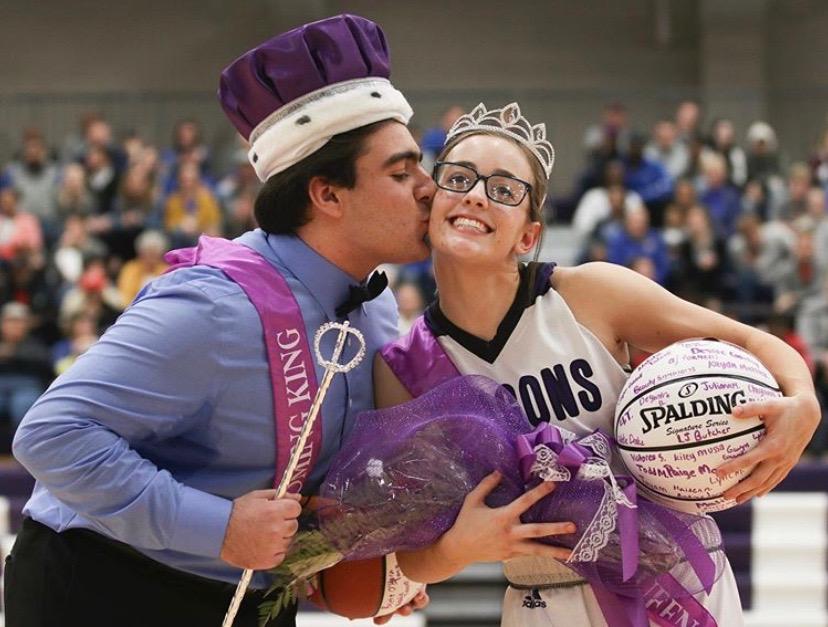 “Right before we were going to go on the court, I was pretty nervous,” Saman said. “I was sweating. Addy [Campbell] was trying to calm me down a little bit. Then when Carmen [Kent] started announcing the names of the lords in waiting, I was expecting my name to pop up and then it didn’t. It’s just crazy, as a junior to get it, and to see how many people support you and all the activities that you’re in. It’s truly remarkable and it means the world to me.”

While preparing for homecoming, Saman spent his time campaigning by making posters, buttons and giving out candy. Talent chose not to campaign.

“I did absolutely nothing,” Talent said. “Just being a junior, I figured it’d be more special for seniors to win, I have another year here. I was kind of going with the flow the whole time. If I won, I won, but like I said, I never thought I was going to win.”

During the crowning ceremony, neither of the candidates thought that they had any chance of being crowned.

“It felt a little surreal,” Saman said. “When I heard the news, I wasn’t expecting it. I really felt a senior would get it. I was very shocked because the senior support was crazy, especially in the student section. It seemed like they were all hovering over the seniors.”

Overall, both nominees were surprised and grateful for the support that they received. Talent said it was an eye-opening experience.

“I didn’t tell anybody to vote for me,” Talent said. “I was in my basketball uniform and still sweating. My hair was up. I didn’t have any makeup on. I was not dressed up in a dress, like the rest of the people. Then to win, shows that it’s not about the looks and about the preparation and everything. I felt it was a realization to just be yourself.”