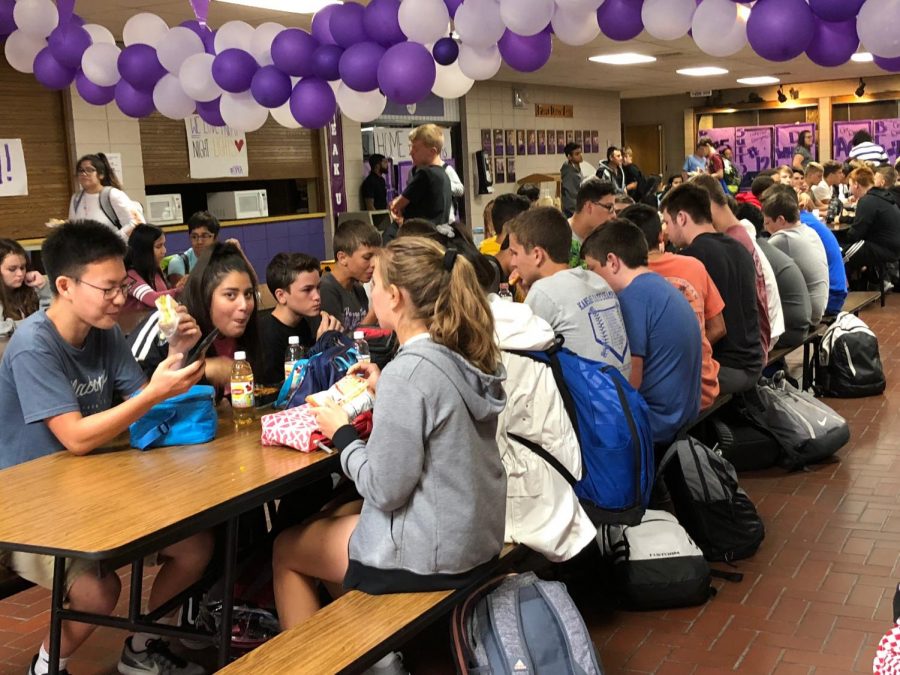 With the new lunch schedule, students must remain seated except when standing in line for food, travelling to the restroom, or throwing away trash.

Purple Power Hour (PPH) has been discontinued until further notice due to student misbehavior, according to principal Phil Bressler. The building staff was notified by an email sent out by admin at the end of the school day yesterday.

“We’ve had conversations of ‘do we need to put something in place and take this away for a period of time,’ and we have kind of hesitated [to do] that, but we think now is the time,” Bressler said.

Administration implemented the 50-minute lunch period on April 16 to give students a break in the day and have extra time to work one-on-one with teachers.

Though admin made the decision to discontinue it yesterday, Bressler said issues including “misbehavior, verbal, physical conflict, horseplay and lack of compliance with expectations” have been going on during PPH throughout this year.

“We didn’t even have a fight yesterday but we [had] several verbal confrontations,” Bressler said. “And it’s a matter of how we structure that so that we can keep kids and staff safe.”

Bressler said issues could not be handled individually due to the amount of misbehavior throughout the entire student body.

Though they decided to cancel it, Bressler said admin is still on board with having PPH. He added that admin will team up with different groups to create a solution.

“We are going to work with our department chairs, our building leadership team and our student leadership team and we are going to try to come up with some solutions sooner, rather than later,” Bressler said. “We visited three different high schools who do the same thing, but they all had to do what we are doing now, they had to take it away for a period of time because kids weren’t respectful of the environment.”

For the time being, lunch will be split into two periods of 25 minutes. Lunch A will be comprised of students in the 300 and 600 hallway. Lunch A students will return to their fourth hour directly after first lunch for an additional 25-minute study hall. Students in choir, gym and Rebecca Lomshek’s room have lunch B after a study hall designated by a bell that rings at 11:50.

Students must remain seated except when standing in line for food, traveling to the restroom, or throwing away trash.

With the discontinuation of PPH, students have lost their time to work on assignments.

“If you look at the vast majority of people, they work really hard on their after-school activities like debate,” senior Austin Edwards said. “Without Power Hour, it’ll be a lot less productive for me. I won’t be able to use that time I’ve had to research for debate and talk to my friends while doing it. It’s going to be especially bad to make the adjustment after we’ve gotten into a routine of things.”

However, junior Kennedy Tomasi said while she doesn’t agree with the administrative decision, she understands why it was made.

“I thought it was kind of ridiculous that the entire school was getting punished for what a few people did,” Tomasi said. “But then I kind of understood the different reasons why they were doing it. It was more of an ‘I don’t agree, but I do understand.’”